Aggression in Toddlers: How to Spot It and Intervene – BabySparks 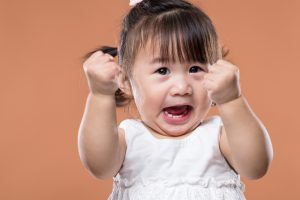 No toddler is a bully. Bullying requires a strong ability to strategize, a concept your toddler hasn’t developed yet. Toddlers don’t understand things the way we do, so what looks like bullying behavior is just your toddler’s way of learning how to socialize.

However, childhood development experts have linked aggressive behaviors in toddlerhood and preschool years to future bullying if they’re not addressed as early as possible.

Signs of Aggression in Toddlers

It’s not until at least age three that more developed signs of bullying occur in children, but your toddler can show aggression much earlier. Between 18 and 24 months of age is when you might notice aggressive behaviors, like hitting, pinching, or biting herself or others. This is the time when your toddler’s emotions will hit a peak of chaos as she learns to understand her feelings and what to do with them.

Other signs of aggressive behavior include:

Although many of these behaviors are typical for any toddler occasionally, frequent outbursts and uncontrollable anger could signal a problem.

When you take steps to stop your toddler’s aggression, she’ll learn that her behaviors don’t get her the results she wants – and they may even turn her friends away from her. Here’s how to break the pattern that can lead to bullying:

The most important thing you can do to curb aggressive toddler behaviors is to avoid reacting aggressively. Your tone of voice alone can set the tone for how your toddler reacts to what you say to her after an emotional moment.

Take a breath and think about what you’ll say before giving her an immediate reaction. Your toddler is looking to you to be the calm in her storm, which is also the guide for her behavior.

Be a significant part of her play.

When you join in your toddler’s play with her playmates, you’ll be able to display positive interactions with others for simple, teachable moments. Joining also doubles as a quick way to intervene and keep everyone safe.

At this age, prompting positive socialization is critical. Work with your toddler on sitting next to a friend or two. You might start building a block tower, invite the little ones to join in, and ask questions, like “What do you think he’s building? Can you give him one of your blocks to help?”

Most of the time, your toddler simply needs a little redirection to remind her that there is a time and a place for activities like kicking and throwing. For instance, you might say, “We don’t kick others. Come over here, and we can kick the soccer ball together.”

Role-playing can be a fun way to help your toddler understand what she feels and what her playmates might be feeling when she acts out. You can find some role-playing activities for toddlers in the BabySparks development program.

For more ways to encourage your toddler to understand and handle her emotions – which can reduce aggression – you can read our articles on emotional intelligence and becoming your child’s emotion coach.