0
All About Teething
19 February 2018
Speech
Baby Gestures: An Important Language Skill
16 February, 2018 by BabySparks in Speech 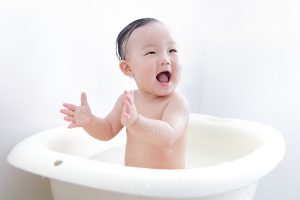 Whether it’s waving goodbye when you walk out the door, clapping when you act silly, or lifting his arms when he wants you to pick him up, gestures are a fundamental part of your baby’s language and social development.

Why are Gestures Important?

They help babies understand. Gestures support your baby’s receptive language development, or his ability to understand language. Using gestures, such as pretending your hand is a cup and bringing it to your mouth when you say “drink,” reinforces language learning.

They help babies communicate. Gestures are integral to your baby’s expressive language development as well, and play a starring role during the months leading up to and following his first words. Before he can say no, for instance, he can shake his head.

They support social communication. Being able to navigate the social world involves “rules” like greeting others, taking turns, and reading and using body language. Gestures like waving, blowing kisses, shaking your head and pointing all support this. Relationships depend on social communication, and gestures like lifting his arms to be held or giving you a toy to initiate playtime help him connect with you.

They offer clues about possible developmental delays. Because gestures are so closely linked to language development, a baby not using enough of them may indicate a developmental delay. According to the First Words Project, if your child is not using 16 gestures by 16 months, it warrants an evaluation by a pediatric speech-language pathologist.

How do Gestures Evolve?

Although some gestures appear earlier, babies generally begin using them around 9 months of age. Here are some of the most common gestures that emerge by 24 months:

How to Encourage Gesturing